PASSION FOR FOOD AND PRODUCTS
“My kitchen is my passion. A solid, classic cuisine. Sometimes traditional, sometimes elegant but always tasty. I always make sure there is no excessive amounts of flavors on your plate, instead I focus on dishes that complement each other in terms of taste. We use only the best products from top producers, if possible, from the Netherlands. Asparagus, strawberries and lamb from Limburg for example. Or hard sheep-and goat-cheese from a small farm on the island of Ameland. Vegetables usually come from Westland, shrimp and tongues from the North Sea and the full backs hares and pheasants from across the country. Next to local products we also have carefully matured beef from Ireland and salmon from Scotland. We smoke the salmon ourselves and cut it at the table. Once served, we pay a lot of attention to making nice combinations in the right portions. At the table, you will always find a carafe with cold water and warm Hague dune floor bread, lightly salted butter and olive oil. We call this hospitality and personal attention “Taverne Meer & Bosch.”.

HISTORY
Centuries ago, the present ‘Meer & Bosch’ was an extensive area of forest and lakes, hence the name. Excavations have revealed that the tribe Menapiërs (1500-400 b.c.) had one of their settlements located here, probably attracted by large quantities of fish in the lakes. In the year 1600 a.d. one Adriaansz Van der Voort, member of the city council and farmer, bought the property and by the end of the 17th. century, a farm named ‘Wijndaelerswoning’ was established. In 1701 a stately country house with an attached coach house, as well as a separate bricked coach house was erected. The entire property became known as ‘Meer & Bosch’.

Baroness van der Mijle and Jacob Cats were, amongst others, one of several owners of the estate in its history. (The latter had bought the property in the year 1712 for 300 Carolian guilders.) The archives state that Brochtorff, a noble man of the Russian tsar’s court, in turn obtained the property rights in the year 1772. By 1817, ‘Meer & Bosch’ took on a different role; it was rented by a priest’s son for housing and educating homeless children. However under the rule of King Willem 1, he was obliged to surrender the property. It was next sold to one mr. Wachter, who decided to demolish the main part of the farmhouse, but built another nearer to the main gate. By 1897, the farmhouse and the stone coach house were the only original buildings remaining. These for several more decades served as ‘tea-houses’.

By 1927 the City Council of The Hague became owner of the entire property and surrounding land. This area formed the western extension of The Hague as we know it today. In 1966, a ravaging fire destroyed most of the ancient farmhouse. It was only after much restoration and rebuilding in 1969, under the jurisdiction of the national heritage body that “Taverne Meer & Bosch” was restored to its present glory.

FAMILY BUSINESS
Since the early 1970s is Taverne Meer & Bosch a true family business. Chef/owner Peter Simons obtained in 1995 the property and is now the proud owner of not only a magnificent traditional French style restaurant, but also of this beautiful historic building. Today, Peter Simons in the kitchen with his two youngest children Yuri and Jelka. Oldest son Dennis is host in the restaurant, along with his mother and uncle. The family is supported by loyal employees that have a familiar face for the regular guests. 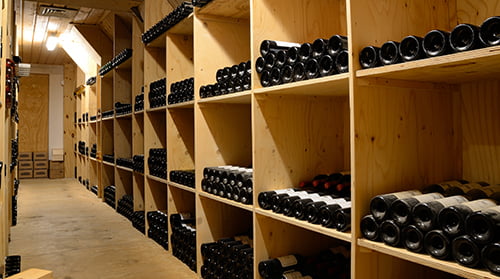 We have a wine stock of more than 8,000 bottles. These are aged at a constant temperature of 13 degrees and an air humidity between 60 and 70% in our wine loft. The choice is yours: a house wine, one of our special or exclusive wines or would you prefer a special wine package? Our employees are happy to advise you.